The space of signs and color

in the work of Enzo Cino

More than ever things

The experienced ones precipitate, because

It is a doing without an image that replaces them once they have vanished. 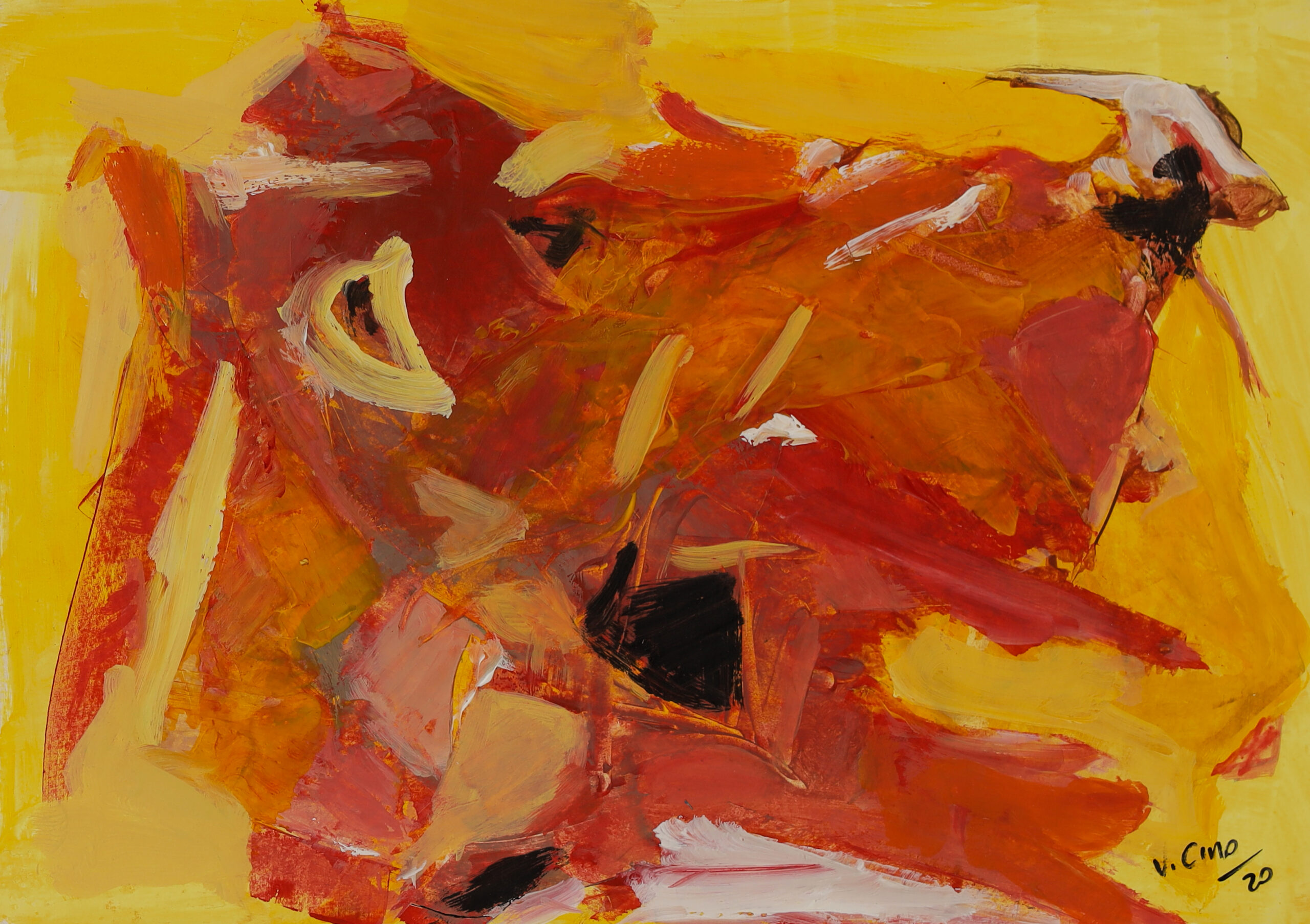 Enzo Cino’s artist experience relates to the singular and ‘necessary’ dimension of art. ‘Active’ painting is the path that the artist follows, with the intensity of a search that brings into play the memory of the soul in revelations of an elsewhere that ‘inhabits’ the imaginative language. In the painting cycles,  the awareness of preconsciousness is revealed to Cino, in a game of making that, in the becoming of shape and shapeless, reflects the ‘dream’ of the unrepresentable. In a pre-logic and a-temporal dimension, ‘landscape’ of a ‘non-world’ that is embodied in the artist’s gesture. Cino’s works are formed in their alchemical transmutation with flashing signs, with spaces of color. Clear diaphanous, tonal saturations but also shadowy intertwining of blacks and whites, between expansions, concentrations and overflowing of signs are the plot of an expressive force that manifests its possible sublimation by embodying the materiality of the work. The singularity of painting lies precisely in the inexpressible ‘giving oneself to see’ of an ever-generating tension, rather than of a closed form, of an eventic painting as an event of painting. Therefore deep surface painting.

A painting that is not a simple game of signs unrelated to the tension between truth and semblance, a painting that puts itself into play in the inquiry of what we do not know, of what we do not see, of a depth that emerges in the variable chromatic scans of the surface trends. In fraying and fractures, as shifting matrices that force the limits of the canvas, the painting work becomes possible occurrence. Of an unknown destiny that the pictorial actus glimpses and waits.

Painting has often been predicted to be depleted, it has been said of a language that has now been overcome by the ‘new’ techno-media and performative possibilities of art. It is an opinion that in its critical-historical simplification has become, in various interpretations, a tired prejudice. Actually, painting persists and transforms itself, lasting over time with its metamorphoses, unpredictable and often of restless intensity, imaginative and poetic. Persistence that is clear from the significant expressions of branching pictorial experiences in the contemporary artistic languages multiplicity. In

Enzo Cino’s works the surface extends and is concentrated together in the evocation of signs and in chromatic matter of memory of the pictorial gesture, in which the past is projected, with temporal synchrony, into the present becoming of the work’s future. It is a non-causal, non-linear time in which all interaction with chronological reality is suspended. The work of painting finds its relevance through the gap that is generated in it with the cycle of things. The time of art, however, is asynchronous with the evolution of logos and calculating action: even if you feel the reflections, the artistic practice upsets the paradigms and cognitive schemes.

The nature of painting tends to displace logos, it escapes its purpose of rational knowledge, aimed at a useful purpose, but it is not separate, it jumps within the logical cognitive process, as irreducible Otherness. The cognitive dimension of art, on the other hand, concerns the perturbations of the being in the time of things. Cino’s painting of this generative paradox is an active testimony.

The sense of the Contemporary is not accountable to the involvment with the dominant sense, rather the sense always resounds with a pause and a longing. As if the languages ​​were generated by an attitude to controversy with definitions, to conflict with the present and to deviation from the ‘one way’. Painting – “flower of the arts”, said Leon Battista Alberti – represents its impetuous and hybrid ‘body’, with its fluctuations and variations, incarnations of the spirit that ‘works’ its material form.
The course of Enzo Cino’s paintings has coherence and mutations, like a river that is always the same and yet changing. In its ‘becoming’ the riverbed remains in which it flows like a magma of multiple formations, as in a volcanic material diffusion of geothermal energy.

From his figurative beginnings we can already glimpse attention to the structure of the surface, in an inclusive dialogue with Cezanne’s ‘constructive’ syntheses. The still lifes of that time are imbued by shifts of things towards space, as in a chromatic vibration that makes their material and formal permanence unstable. It is understandable how those works announced other paths, in an irruption of the gesture that structures the surface in oscillating planes between empty and full. So that he can glimpse the ‘landscape’ scanning of space, of invisible horizons and floating mobile forms, he expanded evocative non-shapes of efflorescence and ramifications. An overcoming of nature and things in a fading of fragments of jagged and de-composed color-shapes in which passages and escapes open towards infinity. The work appears inflected in the lights of day and night, it is constantly changing, hybridized in variations of passages and stratifications. In some canvases a sinuous circular movement appears in graffiti, swirls of reds that open ‘visions’ on the cosmic principle of things.

It is in the polychrome materialization of ‘feeling’ that the gaze is involved, in the variations of the surfaces lighting, in a multiform schedule of the pictorial gesture, of ripping and bonds, of transparency and density, of dissolution, solidification, dissonance. The painting holds ‘the secret’ of the work in the gaze that, perceiving the depth of the surface, passes through it, in a dimension of indefinability that makes the space of signs always appear woven with psycho-topical resonances, like iridescent ‘reflections’ of the soul.

It is the memory not of places but of “sensations”  that permeates Cino’s works. The subject and the object dissolve in the appearance of an “other world”, in a no-where in which the ego withdraws, letting pass what is not definable.

A space without coordinates that pulsates and stretches “in silence”, like a breath of the immeasurable. Where things disappear, absorbed and returned by the painting as “lyric powers” in the traces of invisible architecture. The evocation of an elsewhere is Enzo Cino’s research, where the shadow of things passes, transfigured into rhapsodic projections of the pictorial gesture. A gesture that seems to seek a space of meaning within the aniconic formation of the chromatic matter. In some works, the color spectrum variation is canceled out by the polarization of black and white that intersects in overlapping, interactions and mixes, creating fragments and cracks of gray streaks and filaments. The origin of the chromatic ranges, of dense variability, is in the memory of natura naturans: blue and green echoes of the sky and of the fertile earth, sharp yellow chromes but also softened by the tangency of delicate celestial and brown, red in magmatic, sanguine and solar perform a dance of fragments aimed at their knotting into ‘bodies’ and indistinct spaces, unknown to the daily gaze, openings of the soul towards unheard-of territories of the visible. As if Cino ‘thought’ another nature in painting or perhaps a profound sense of visible nature.

Even in the wake of ‘informal’ experiences, Cino’s painting delves into its possibilities on a research that is not dissolute but in its own way ‘edifying’. In this, despite the radical ‘poetic’ differences, it can be compared to the abstract expressionism of Emilio Vedova and the singular informal version of ‘architectural’ tension by Pierre Soulages or to the fluctuations of matter and sign of Asger Jorn’s painting. In some cases, it can also recall the work of Afro, for the lyrical and ‘memorial’ aspects. In Cino’s work there are also similarities with the American abstract expressionism that was declined in Action Painting and Color-Field Painting. The first aimed at gestural automatism towards the ‘infinite’ expansion (Pollock, de Kooning, Kline), the other at the condensation of chromatic spaces (Rothko) and ‘figures’ of signs (Motherwell, Guston, Still).

Yet, in Cino’s work, the root of light and color of the Neapolitan ‘scene’ resonate above and below, in its expressive, anthropological and environmental phenomenology display. In the Neapolitan area and more generally in the Italian panorama, the informal version in painting had essential distinctions from the European and American one. The echo of an anthropological root transpired in the nuclear works of the artists of Group 58. Waschimps’s informal was of dramatic decline and in Cajati almost tended to a ‘narration’ of chromatic materials and fragments of transparencies and corrosions. Colucci, on the other hand, carried out his very  own dripping with cosmological and mystery vocations.
Enzo Cino’s work appears as an interaction between the ‘Nordic’ and American disenchantment, albeit in the germinative (Pollock) and sign (Motherwell, Guston) variants and the emotional, memorial and geo-anthropological events of the Italian art, especially in Naples.
In the nature of Cino’s painting (not ‘painting of nature’) the perceptual planes intertwine in an unconditional modification, as in an unlimited efflorescence. A restless ‘soul’ that moves the pictorial faults, as in a thought that has a side of a counter-thought, and the crossing of the two generates a vision of the impossible. Where the author is involved in the circle of mutations and portrayed in the other nature, he himself as a vocation in unthinkable otherness of meaning that displaces the concept and ‘encounters’ the mystery, not only of ‘hidden’ worlds but also of painting itself. The path that Enzo Cino travels is of unpredictable developments even from the concept  internalized by the artist: painting as a time of being in the world that transcends its limitation, in which the ‘finite’ of the tangible work is a trans-coloring echo of the infinite.